The perils of doing yoga have flooded the news this fall. Pastors and Christian leaders have declared yoga an evil practice because of its pagan origins.  I’d agree that using certain words (namaste, om, etc.) and emptying the mind or worshiping the sun god with mantras is absolutely counter to our beliefs and dangerous to our faith. We have become too loose in our acceptance of Eastern mysticism and universal beliefs.  However, the act of controlled breathing, relaxation, and stretching are not the Enemy’s territory to monopolize. God’s the one that created all those things. He gets first dibs. In my estimation, avoiding the religious connections and looking upward (at Jesus) and not inward (at self) is a healthy way to incorporate many helpful exercises. “[…] most yoga currently practiced in America only slightly resembles the original practice. In fact, most of what we call yoga in the West is not truly yoga at all—it is only asana, the physical postures, and pranayama, the breathing exercises. There are myriad schools of thought in modern yoga and to sum all of them up in a few paragraphs would do them no justice. Hinduism involves yoga; all yoga is not Hinduism” (Revelant). So, be discerning about what you are getting into and whether your yoga class focuses on the physical aspects or the spiritual. Better yet, find a PraiseMoves class.

I am not opposed to my child putting up a rainbow in her window just because homosexuals have diverted it for their personal branding. Nor am I against putting a tree in my house. God created rainbows and trees.

Many people don’t realize this, but evergreens were originally cut down and brought into the house to honor pagan gods. “Early Romans used evergreens to decorate their temples at the festival of Saturnalia, while ancient Egyptians used green palm rushes as part of their worship of the god Ra.”(The Christmas Tree:...).

“In Northern Europe the mysterious Druids, the priests of the ancient Celts, also decorated their temples with evergreen boughs as a symbol of everlasting life. The fierce Vikings in Scandinavia thought that evergreens were the special plant of the sun god, Balder.” (History of the Christmas Tree…)

“[…] as late as the 1840s Christmas trees were seen as pagan symbols and not accepted by most Americans.

It is not surprising that, like many other festive Christmas customs, the tree was adopted so late in America. To the New England Puritans, Christmas was sacred.”

Ironically, most Christian scholars believe that Jesus was not born on December 25th, but more likely in a warmer month. Due to deductive reasoning regarding the census, the shepherds’ habits, and other clues, we can probably even rule out December altogether.  Christians adopted December 25th despite the indications pulling away from that time of year. Why?

“The standard explanation is that the early church conflated its celebration of the Nativity with pre-existing pagan festivals. Romans had their Saturnalia, the ancient winter festival, and northern European people had their own solstice traditions. Among the features: parties, gift-giving, dwellings decorated with greenery.

The reasoning goes that the growing church, recognizing the popularity of the winter festivals, attached its own Christmas celebration to encourage the spread of Christianity” (Andrew Santella).

Logically, it makes more sense to follow the Advent calendar and celebrate Epiphany (January 6th) and Easter (Resurrection of our Lord) than to honor December 25th. As my pastor once said, we aren’t commanded in Scripture to remember His birth, but we are commanded to remember His death and resurrection until He comes again.

“The early church father Origen argued against celebrating Jesus’ birthday: ‘It is only sinners like Pharaoh and Herod who make great rejoicings over the day on which they were born into this world.’ The Puritans of 17th-century Massachusetts famously banned the holiday, in part because they found no Biblical authority for celebrating the Nativity on Dec. 25″ (Andrew Santella).

So, some believers in good conscious to what they know and understand cannot adhere to the December 25th rituals and prefer to avoid bringing creation into the house (real or fake). They don’t watch Christmas movies, elevate Santa, or give out presents, and other Christians feel strongly that the pagan day can and should be redeemed. That the celebration is cause to give a little more, share a little more, or speak of Christ’s birth. Of course, we don’t need Christmas to do any of those things.

1. Ask the Lord to assess and illuminate your heart and motives. “Every way of a man is right in his own eyes, but the LORD weighs the heart” (Psalm 21:2). Seek the Lord and ask Him to illuminate what you are doing and hold your traditions/practices with open hands. Has He called you to give up or take on something unique? Follow that leading.

2. In areas of grey, don’t judge other people for their convictions or put all “good Christians” in one box, marginalizing others. Some personalities struggle with this concept more than others, but everything doesn’t fall into the black or white box.

Romans 14:2-8, “One person believes he may eat anything, while the weak person eats only vegetables. 3 Let not the one who eats despise the one who abstains, and let not the one who abstains pass judgment on the one who eats, for God has welcomed him. 4 Who are you to pass judgment on the servant of another? It is before his own master[a] that he stands or falls. And he will be upheld, for the Lord is able to make him stand.5 One person esteems one day as better than another, while another esteems all days alike. Each one should be fully convinced in his own mind. 6 The one who observes the day, observes it in honor of the Lord. The one who eats, eats in honor of the Lord, since he gives thanks to God, while the one who abstains, abstains in honor of the Lord and gives thanks to God. 7 For none of us lives to himself, and none of us dies to himself. 8 For if we live, we live to the Lord, and if we die, we die to the Lord. So then, whether we live or whether we die, we are the Lord’s.

3. Remember that God is a God of redemption. What is His creation remains so. Seek to restore what has been lost or neglected. 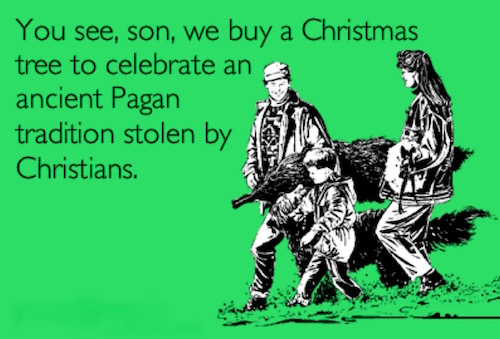